Five Quarters of the Orange

Five Quarters of the Orange by Joanne Harris
My rating: 5 of 5 stars

Harris's story was surprisingly sweet and her prose was like magic. At first, I didn't know if I would like her style. I have gotten sick of the flashback set up where the reader meets the character as an aged soul who is reflecting on her childhood. But, Harris does this with such care. She truly knows how to grip the reader's attention and heighten their curiosity.

This book is one about what it means to be brave, to keep secrets and the danger of being charmed by the snake. I will definitely be reading more from Joanne Harris.

Beacon 23: The Complete Novel by Hugh Howey
My rating: 3 of 5 stars

It's hard to describe my thoughts and feelings about this book. I was mesmerized by the metaphor of the lighthouse but I was disturbed by the characters.

I felt like this would be the perfect book for someone who loved Sci Fi and had a dark sense of humor. I love Sci Fi but I lack the darkness. The writing was very harsh but well done. This is not a book I would suggest to my mom. The language is strong and the themes are quite dark. The metaphors and the prose however, are beautiful. 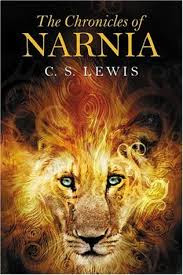 1. The Chronicles of Narnia

I picked up The Lion. The Witch, and The Wardrobe when I was about 8. I remember mentioning it to my dad who told me it was one of his favorite books. This confused me. Why was an adult so interested in a book clearly written for children? Now I get it. Narnia teaches you about courage, benevolence, integrity coupled with Christian beliefs and values. Narnia is fun and magical, yet real and serious at the same time. C.S. Lewis, thank you for sharing your world with us.

One of my favorite things about Lewis is his life story. He struggled with his faith, love life, depression and was wounded during war time. Just as Narnia mirrors his faith, many of his other books mirror his struggles and triumphs. When I was in high school, a friend of mine committed suicide. I struggled with this for some time. I found consolation in Lewis's A Grief Observed. He understood that grief and sorrow are necessary and helped the reader revel in their pain and then find the strength to pull themselves out of it.

"No one ever told me that grief felt so like fear. I am not afraid, but the sensation is like being afraid. The same fluttering in your stomach, the same restlessness, the yawning. I keep on swallowing."

During his time in the army, Lewis and a friend made a pact that if either were to die, the other would take care of both families. Lewis's friend "Paddy" Moore died in 1918. Lewis cared for his mother, Jane Moore, until she became quite ill and passed away.

"Someday, you will be old enough to start reading fairy tales again."

If you didn't laugh during The Horse and His Boy, your funny bone is most definitely broken. Lewis does an excellent job embodying the mind of a child and oh what fun it is to laugh at childish things!

5. His Choice in Friends

Many fans know that Tolkien and Lewis were friends and rivals. This fact warms me to my very soul. No two men in existence had a stronger impact on my imagination and love for literature than these two. Sometimes I wonder if they knew how important their works would be to lonely little girls who would rather read than play kickball during recess.

Everything I Never Told You

Everything I Never Told You by Celeste Ng
My rating: 3 of 5 stars

Beautifully written, but too much for my heart. I felt as though Everything I Never Told You forced the reader to suffer just for suffering sake. I do love myself a good heart wrenching novel but this one wrenched and pulled and twisted. I found myself in a bad mood after reading it. I had to force myself to turn the pages. I didn't want to know what happened next.

The characters were beautifully done. I connected with Lydia on a level only introverts can but I still couldn't enjoy this book.

I give it a three because it is beautiful and Ng clearly does a great job emoting feeling in the reader, but I just couldn't take it.

View all my reviews
Posted by Unknown at 7:00:00 AM No comments:

Top Ten Tuesday: Five Books I Feel Differently About After Time Has Passed

This was one of the first books that really made an impact on me. I read it first as an 8 year old and then again recently as an adult. There were so many things I missed the first time around. I knew I loved this book, but as time has passed, I discovered it is part of who I have become. This is part of what saddens me when students tell me they hate reading, you're missing out on part of your identity.

"It was a pleasure to burn." This is the part I did not fully understand years ago as a high school freshman. I did not get what was "pleasurable." But after reading it again, I now understand how easy it is to see something evil as pleasurable.

I know, I talk about this book a lot. Who can blame me? Fitzgerald writes prose like none other. Every time I read it (I've read it about 5 times) I notice something I didn't before. Most recently, I was filled with sorrow for Daisy's children more than ever before. They are trophies, just like Daisy. As Daisy describes, their best hope in this world is to be "beautiful fools."

It is simply not possible for someone to grasp this book completely on the first read. In fact, it is not possible to grasp it entirely, ever. Coelho fills this book with such wisdom and peace that can never be fully understood. Like the Bible, it can be interpreted in hundreds of ways. When I first read it, I thought it was well written but a little dry. Upon reading it a second time, I discovered it is not at all dry! It is full of sweet, juicy prose.

5. The Chronicles of Narnia

At first, Narnia was a fictional world full of fantasy and imagination. But after I have grown and re-read it, I have learned that it is a story of faith. When characters are tempted and fail, we see them redeemed. When faith is tested, it shines out all the clearer. Yes, this book is for children. But that is only the starting point.

The Storied Life of A.J. Fikry

The Storied Life of A.J. Fikry by Gabrielle Zevin
My rating: 5 of 5 stars

I loved every minute of this book. It was written simply yet large themes could be found throughout. I found myself loving AJ and Maya and everything they go through. This was one of those books that I wish went on forever. I could never get enough.

Zevin's simplistic tone emoted feelings to the very core of the reader. As I learned about Maya's mother and read her creative story, I couldn't help but feel as though I were on the beach as well with my toes touching the cold, damp sand.

This is the perfect lazy Sunday book.

View all my reviews
Posted by Unknown at 7:19:00 AM No comments:

What Alice Forgot by Liane Moriarty
My rating: 4 of 5 stars

This is a tale of a 29 year old trapped in the body of 40 year old...well sort of. Alice hits her head in spin class and forgets 10 years of her life.

Moriarty's writing style was catchy and fun. This story really makes you think about what you value in life and how your maturity and age has such a strong influence on relationships and perspectives.

I particularly enjoyed that the story followed her memory loss more than it did the love story between her and Nick. There were snippets of ooey-gooeyness but not an unbearable amount.

I would suggest this as an easy vacation read.